So today we make sense of SOM, BIG, Hargreaves.

OK a couple things here. First, whenever BIG is involved I expect some seriously inspiring but loony shit. Second, the boards are a bit deceiving in that they seem oversimplified and a bit gimmicky. But you really can't judge the entry unless you read the plan narrative, which at 337 pages make Charles Dickens seem concise.

This scheme is like running into a schizophrenic wild-card broad at a bar. A real firecracker, you never know what you are gonna get. I can just imagine squeaky corporate SOM telling Bjake Engels to keep it in his pants while Hargreaves sips on a mimosa sketching in their moleskin. Sadly, when the personality of this entry is revealed, it isn't the good side or the bad side of that crazy chick, just the slightly boring/apathetic side. Some thoughts. . . .

1) I do like the economic analysis, done by URS in this case. It was one of the points of emphasis for the team and surely will figure in the decision. You have to make sure people like mayor Slay and his developer buddies have a reason to get excited even if the projections are a bit far fetched. The fatal mistake was putting out renderings below that visualize their unrealistic economic expectations. Good idea, poor execution.

2) The amphitheater across the river and the cap over the freeway are both decent ideas. I enjoy the restraint here, most likely on SOM's part. The amphitheater doesn't try to swim in the swift currents of the Mississippi like it does for Benisch and the freeway cap takes advantage of the fact that I-70 is already below street grade. No need to rip it out, just cap a few blocks.

3) The ramped landscapes and green roofs are a tad overdone. Dare I say they are trendy and could look foolish in 2020. BIG's fingerprints are all over this aspect of the plan. It would be fine if it were pushed as a primary concept but it isn't. And I don't think it was executed that well. The connection of the North Pavilion to Eads Bridge is particularly clumsy. The swimming pool on the river is a direct rip off of this and this. If it's possible to rip off your own work. . . or just copy and paste it into the competition.

4) Whispering Leaves and Magic Carpets. The whimsical themes of children's tales or in this case, gimmicky tags for expensive line items. I did say I liked the cap over the freeway, but do we have to call it a magic carpet? And why are these giant metal leaf-like structures whispering? I'm confused.

Ultimately this entry suffered from an identity crisis. Like good 'ol two face from the Seinfeld days. There were signs of the fantastical vision of BIG constantly being thwarted by Daddy SOM and favorite son Hargreaves. We were left with the gray afterbirth. Some clumsy adaptations and concessions that lacked cohesion and ultimately lacked the ability to inspire. While some people are ripping the oversimplified boards, I think it was a case of too many cooks in the kitchen. After all Engels likely had 100 unpaid interns cranking out study models like this over in Copenhagen while SOM, URS and Hargreaves greased the developers' wheels. 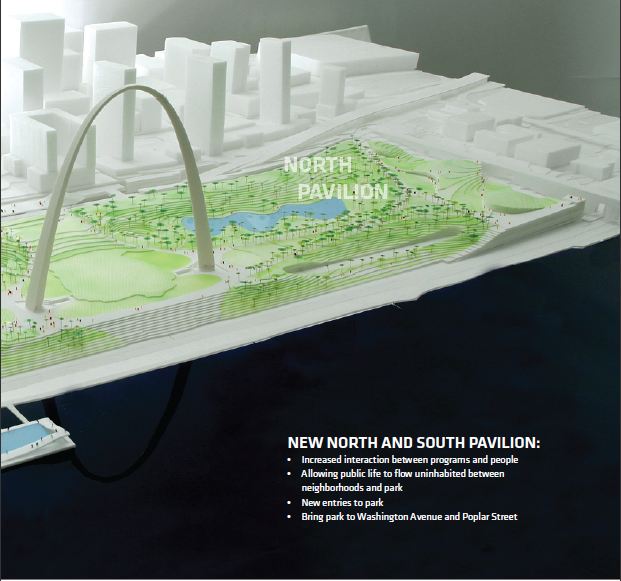 Rating the STL Archground Competition on the BINARY Scale

1's and 0's. That's all that matters. When the rubber hits the road and a decision needs to be made - think like a computer and assess the binary scale. Besides, the AP scale, Letter Grading, and the old 1 - 10 can be so arbitrary and controversial. Is it a Go or No Go? Really that's all that matters. As Situation would say, you gonna smoosh that grenade or not?
So when the five finalists for the St. Louis Archgrounds competition were announced last week, it got me thinking. Why can't we apply the same "3am, I'm drunk and they just turned the lights on in the bar" logic? Because really you know there is going to be some "distinguished" panel at Wash U blowing hot air around about how this design is slightly better than that. Blah Blah Blah. In the end let's just ask one question. St. Louis, would you or wouldn't you? This is after all your legacy for the next 50 years. So don't go home with a grenade if there is a 10 lurking in the shadows. This week I'll review one scheme each day and give it a "1" or a "0". By week's end we should have a winner.
Starting in reverse order we have Weiss/Manfredi:

My first impression: not too shabby. Beside some laughably inadequate aerial renderings, the boards look good and the vision both realistic/believable (they only have 5 years to finish) and exciting. The "Circle" idea is certainly not unique but I believe it a lot more here than I do in other schemes. Here are some quick thoughts:
1) Ferry Loop - A freaking home run. This idea is so much better than Benisch's gondola people mover. After all, we are on the Mississippi right and not in the Alps? I think tourists and locals alike would love to say they've sailed on the Mississippi even if it is only a wimpy loop. The ferry experience is still one that exists today and is a nice homage to the history of the river.
2) Much will be made of the connection to downtown from the arch and rightfully so but I like the careful attention paid to the connections to Choteau's Landing and LaClede's Landing. Both will obviously be the places were increased land value will spur residential and mixed use development. Both house the sorts of amenities and connections that the new inhabitants of these areas will demand. I buy the "Cultural Canopy" ideal on the north side and I buy the more gritty "Activity Loops" that engage the heavy infrastructure on the South Side.

3. The plan seems a bit one sided in that there isn't much cultural/entertainment programming on the Illinois side of the river. I hate to say it but even though the amphitheater is as cliched as it gets, I think Benisch had the right idea in putting it on the Illinois side. You really need a compelling reason/catalyst that will draw people across on the ferry and revamped bridges. I don't think a cultural/ecological center alone is going to do it.
4. The Urban Bluffs, man. A Ballsy idea. In theory it seems to be appealing since it would acknowledge the flood condition of the river and allow access to the river's edge during that condition. The section below is great. It also is the staging point for the ferry experience. But boy would they have to engineer the hell out of it to make it work. Not to mention there would be massive maintenance costs from debris collecting on the bluffs. It could be a great idea or it could be a disaster.

OK, with all that build up, it's getting late and we gotta decide yay or nay. Honestly, the Weiss Manfredi scheme is no grenade. It's not a landmine either. Just about a "Potato Sack" girl as El Pres would say.
For that the verdict is 1.
Posted by ZimmDizzle at 11:38 AM 3 comments:
Email ThisBlogThis!Share to TwitterShare to FacebookShare to Pinterest
Tags: Arch Competition, Architecture, Design, Takes

"Nice to meet you. I already know you from Facebook!"

So I know it comes as a shock but I am the not the kinda guy who is well known in the real housewives circles. Not that I don't appreciate the older ladies. . . cause I do. I've been a vocal supporter of Urban Cougar for almost a decade now, falling prey a couple of times during my single days. But this weekend was a whole different story.
I was at a wedding in Memphis for my girlfriend's best friend. Lovely ceremony really and an all around good time. Think Bar-B-Que, mixed with punk rock, mixed with an armada of bridesmaids and groomsmen, mixed with southern weather that only a sauna could compare to. Nothing like a heat index of 115 to help the weekend run smoothly.
In any event, Jordan warned me that I would need to be herded around the reception to meet all the people that "knew" of me. "Fine," I said as I saw a leggy blond walk by. Over the course of the next hour I met maybe a half dozen of Jordan's family friends. I'm not even paraphrasing when I say every single conversation went like this. . .

Jordan: Hi so and so, good to see you! This is my boyfriend, And. . "
So and So Housewife: . . Andy! Hi! (shaking hand but most likely awkwardly hugging me) I know you from Facebook. I've seen all the pictures.
Me: (pause) ahh yup.

So when I've dreamed of my facebook stalker, and trust me I have, I was thinking more this than that. Seriously, who knew I was such a hit among Memphis Housewives? Literally every one I met mentioned me and facebook in the very first sentence they uttered. Which begs the question, if I am such a hit down there, what other middle-aged female demographic is consuming my facebook pictures like a pint of Haagen Daz during a Matthew McConaughey flick?
Oh yeah and if you are over 50 and haven't signed up for facebook, here's how. I promise I'll accept your friend request.

If any of you know me, you've heard me talk about "Gramps". God love him. He just gets shit done. When I was a kid, I'd stay summers down at the beach house in Narragansett. Since it was a seasonal home, "Big Nick" as he is known never bothered to set up trash service. Why would he? It's much more fun to throw smelly trash in the trunk of the Cutlass Supreme station wagon and drive down the road to Cumbee's. They don't care if you throw your shit in their dumpster, right?
We'd pull up around the side, Gramps would throw it in park, pop the trunk, grab the trash and heave it over the lip of the dumpster as only a 75 year-old could. Meanwhile, I'm nervously strapped in the front seat and the only thing my eyes will look at is the sign on the dumpster that reads something like this:

"This dumpster is for Cumberland Farms trash only. Don't throw your shit in here. If you do and we catch you, you'll go to jail."

Nice, like I have any shot of bailing ol' Gramps out if say a cop at the Dunkie's next door happens to catch him doing this?! Oh yeah, you know there was a Dunkie's next door. In fact once the trash was gone we pretty much b-lined it straight there for some sick glazed donuts and crullers. Crushed it every time.
I mention this because, here in the Lou, where you can still smoke in bars and let your dog crap on the sidewalk without fear, there happens to be no curbside recycling. That's right. That's basically the equivalent of not setting up trash service ala Gramps, except St. Louis does it for all their recycling minded residents. Needless to say once a week, I throw the recycling bin in the trunk and drive to good old Givens Hall. The sight of which is like seeing this guy if you are James Bond. Pure torture. But what else can you do except throw it in park, pop the trunk and heave ho!
Posted by ZimmDizzle at 11:32 PM 9 comments:
Email ThisBlogThis!Share to TwitterShare to FacebookShare to Pinterest
Tags: gramps, life, stories
Newer Posts Home
Subscribe to: Posts (Atom)